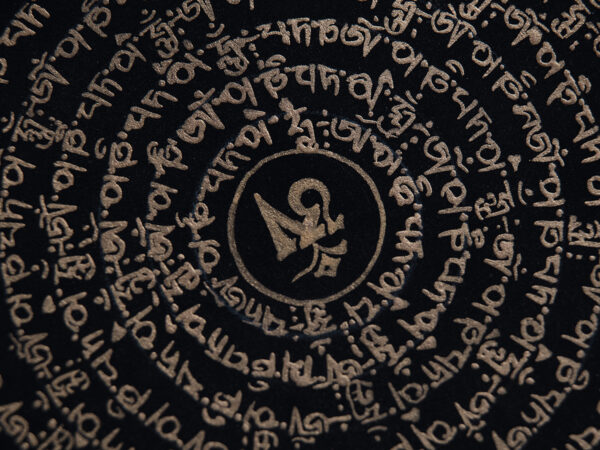 900 kr
24k gold Om Mani Padme Hum Mantra.  Handpainted by artisans in the Dalai Lamas summer temple. Unique Handpicked in North India by the Himalayans, when traveling on spirtual journeys. Comes in a paperroll without a frame 25 x 25 cm     On the meaning of OM MANI PADME HUM (Mantra) by His Holiness Tenzin Gyatso the Fourteenth Dalai Lama of Tibet.   It is very good to recite the mantra OM MANI PADME HUM, but while you are doing it, you should be thinking on its meaning, for the meaning of the six syllables is great and vast. The first, OM, is composed of three pure letters, A, U, and M. These symbolize the practitioner’s impure body, speech, and mind; they also symbolize the pure exalted body, speech, and mind of a Buddha.   How is this done? The path is indicated by the next four syllables. MANI, meaning jewel, symbolizes the factor of method- the altruistic intention to become enlightened, compassion, and love.  Just as a jewel can remove poverty, so the altruistic mind of enlightenment can remove the poverty, or difficulties, of cyclic existence and of solitary peace.    The two syllables, PADME, meaning lotus, symbolize wisdom. Just as a lotus grows forth from mud but is not sullied by the faults of mud, so wisdom can put you in a situation of non-contradiction whereas there would be contradiction if you did not have wisdom. Purity must be achieved by an indivisible unity of method and wisdom, symbolized by the final syllable, HUM, In the mantra, or tantra vehicle, it refers to one consciousness in which there is the full form of both wisdom and method as one undifferentiable entity. HUM is the is the seed, that which cannot be disturbed by anything.   Thus, the six syllables, OM MANI PADME HUM, mean that in dependence on the practice, which is in indivisible union of method and wisdom, you can transform your impure body, speech, and mind into the pure body, speech, and mind of a Buddha. It is said that you should not seek for Buddhahood (state of perfect enlightment) outside  of  yourself;  the  substances  for  the  achievement of Buddhahood  are within. . (From a lecture given by His Holiness the Dalai Lama of Tibet at the Kalmuck Mongolian Buddhist Center, New Jersey.)
Add to wishlist
Add to cart
Quick view

Selenite are named after the Greek Goddess of the Moon, Selene. It means a stone from the moon and has been used since the ancient time in Greece and representing the moonlight It is associated with the crown chakra which represents the higher consciousness & creative energy.

Selenite is excellent to use for clearing, cleansing and to recharge positive energy in your space. Brings clarity & communication with higher realms. . It is also great to use for recharging other crystals & gemstones. Use it to move and spread light in a room, when meditating to calm the mind, or doing full moon rituals.

SPHERE a high sheen satin-like crystal ball is excellent for spreading light energy in all directions and are often used to fill a whole space with clearing and positive energy.

Selenite is self-cleansing and can heal and cleanse other crystals in its’ environment. You can also clean your selenite by putting it in sunlight for maximum of 30 min or place it in a full moonlight over night.

When the light is returning to our showroom & office

Whatever you do in Life - whatever you think in Your mind - Whatever your actions are towards other is a mirror and a reflection back to your self. Your own selfdevelopment. The eager to help the other can be the source of a need to help yourself - or just the source from pure unconditional love.

Where are you in connection with towards the other person?
Is it from your heart and your true self - having fun and experience life out from love, or is it from your need to change and help your self with your own struggles through the other?

Ask yourself these questions: Who do you choose to hang out with? - And why?
Is it from your true self or does it come from somewhere else?
Is the relationship pure love?
Or is it expectations to complete your own needs? Do you give or do you take?